Colours in the reefs

Colour is an important form of communication between males and females and between young and adults.

These colorations are the result of the presence of special pigments and a series of other factors, including phenomena like refraction and light interference. The various interpretations are based on two primary needs: COMMUNICATION and DEFENCE.

In the first case, colour is used as a visual signal directed to individuals of the same species or of other species.

For example, during the mating season, females show their willingness to mate with males by taking on a more lively coloration. In other cases, colours can serve as a warning signal, and it is not a coincidence that “dangerous” species, with poison or spines, are often highly colourful, such as the lionfish.

Our most visually impressive tanks are those reproducing the tropical seas. The colours, forms and sheer quantities are what most strike visitors in this voyage exploring seas from all over the World.

By observing a coral reef, the question that arises immediately to mind is: “How can so many different life-forms live together in such a small space, each one with its own needs for territory and food?”.

The answer is relatively simple, even though the concept that emerges is one of the pillars of ecology. The cohabitation of a multitude of species depends on the possibility that exists for each of them to occupy a different ecological niche. A stretch of coral reef cannot be the home of two species with the same ecological needs.

This would lead to a struggle for surviving that would inevitably result in the desappearing of one of the two competitors.  Staying in different ecological niche has in fact the aim to avoid this risk.

Modern research has demonstrated the existence of small differences that allow every organism to exploit exclusively just one of the many pieces of the complex mosaic that constitute an ecosystem.

Coral reefs can be considered the world’s most ancient ecosystems. Typical of warm seas, they occupy a geographical area between the twp Tropics, the one of Cancer and of Capricorn, in the Caribbean Sea, among the islands of the Indian Ocean, in the Red Sea and in the Persian Gulf, in the islands of South-Western Asia and in the South Pacific Ocean.

These reefs are massive deposits of calcium carbonate - secreted by stony corals - and, to a lesser extent, by algae, hydroids, polychaete worms and by every other organism capable of depositing carbonates. The environments formed in this way become themselves the habitat and the refuge for all the organisms that participate in the construction of an ecological equilibrium, that is one of the most amongst complex and fascinating of the world.

The considerable vertical growth of coral reefs is due to changes in the levels of the sea or in the subsidence of the seabed that happened in the past. The most important characteristic of hermatypic corals (able to form a reef)  is the presence of symbiont algae (zooxanthellae) that live in their tissues. The photosynthetic processes allow carbon dioxide to be fixed, increasing the capacity of corals to deposit calcium carbonate, and supply organic molecules indispensable for their hosts by recycling the inorganic compounds in wastes, containing phosphorous and nitrogen, which would otherwise be eliminated.

The symbiosis between polyps and algae is so close that, during sexual reproduction, each egg is released  with its own zooxanthellae. Polyps, in fact, are able to obtain by themselves less than half of the nutrients they requir; most of the food they need is supplied directly by the zooxanthellae.

Some of the marine creatures that live on coral reefs satisfy their needs for food and a suitable habitat where they can live by forming reciprocally beneficial associations with other organisms.

When two or more organisms live together, and each receives advantages from this association, this is called “mutual symbiosis”.

In the past, the association between clownfish and sea anemones was seen as a form of commensalism, as it was thought that the fish was the only one to take advantage of it. 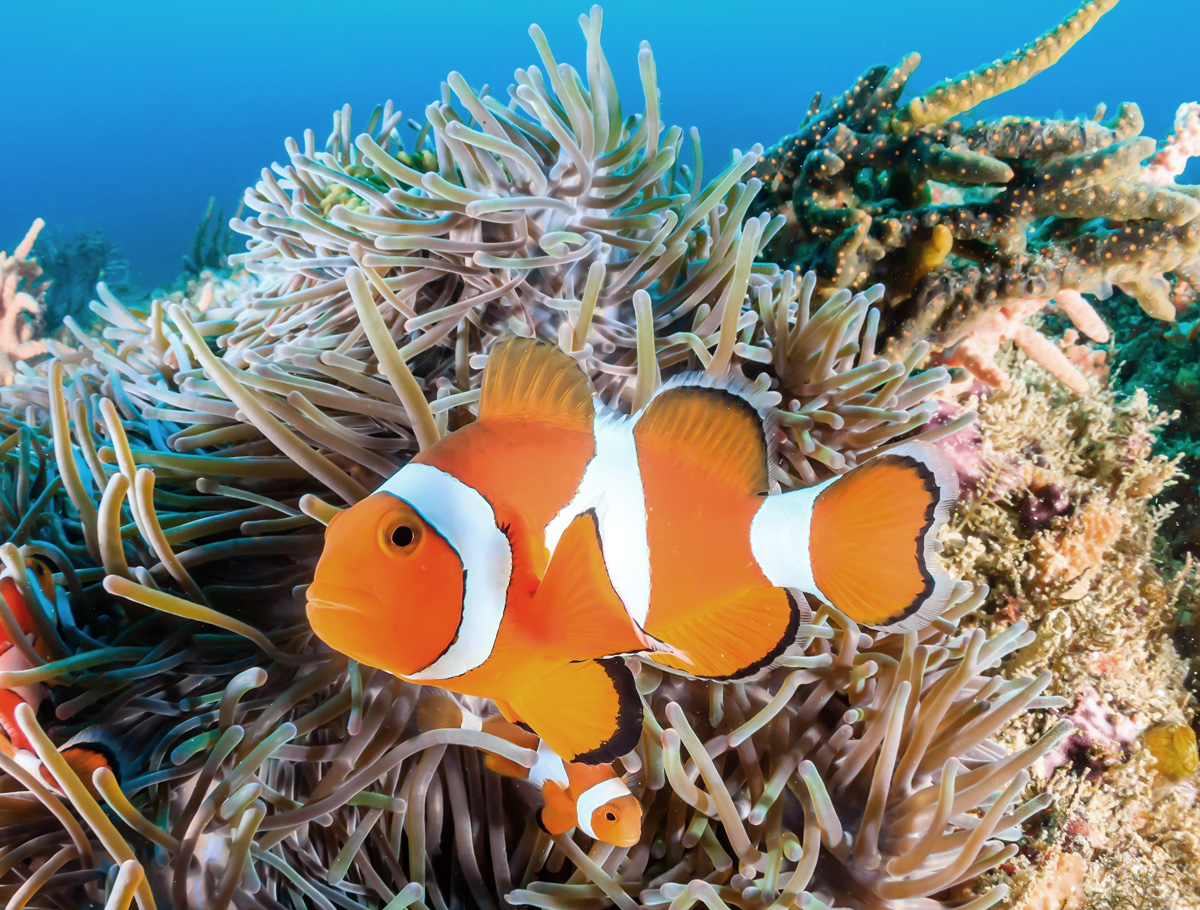 Nowadays the association is considered to be a mutual symbiosis, as it has been shown that the anemone also receives advantages from the relationship. Fautin, Westfall et al. (2004) demonstrated that on the Eilat reef in Israel, bubble-tip anemones living in symbiosis with the Red Sea clownfish extend their tentacles more often than anemones without guest fishes.

When the clownfish were removed, some butterflyfishes attacked the anemone making it contract and shrink back into their cavities.

For the clownfish, the advantages of the symbiotic association consist primarily in the protection they obtain against possible predators from the nematocysts present on the anemone tentacles. The fish is not affected by these nematocysts, as it is covered by a layer of mucus similar to the mucus covering the tentacles of the anemone.

In this pool dedicated to the symbiosis we find the clownfish who live in perfect symbiosis with the sea anemone (Entacmea spp): To keep them company there are the Codarosa crossbow fish, the angel fish of the Red Sea and some flagfish.

The special "moms" of the sea

Survivavl is a question of evolutionary strategies: in the seahorse, as well as in the cardinal fish, the difficult role of gestation is entrusted to males.


While in Seahorses  incubate fertilized eggs inside a special abdominal pouch, in the cardinal fish the gestation takes place inside the mouth of the male that, during this period, will stop feeding to ensure the corret development of the fry. 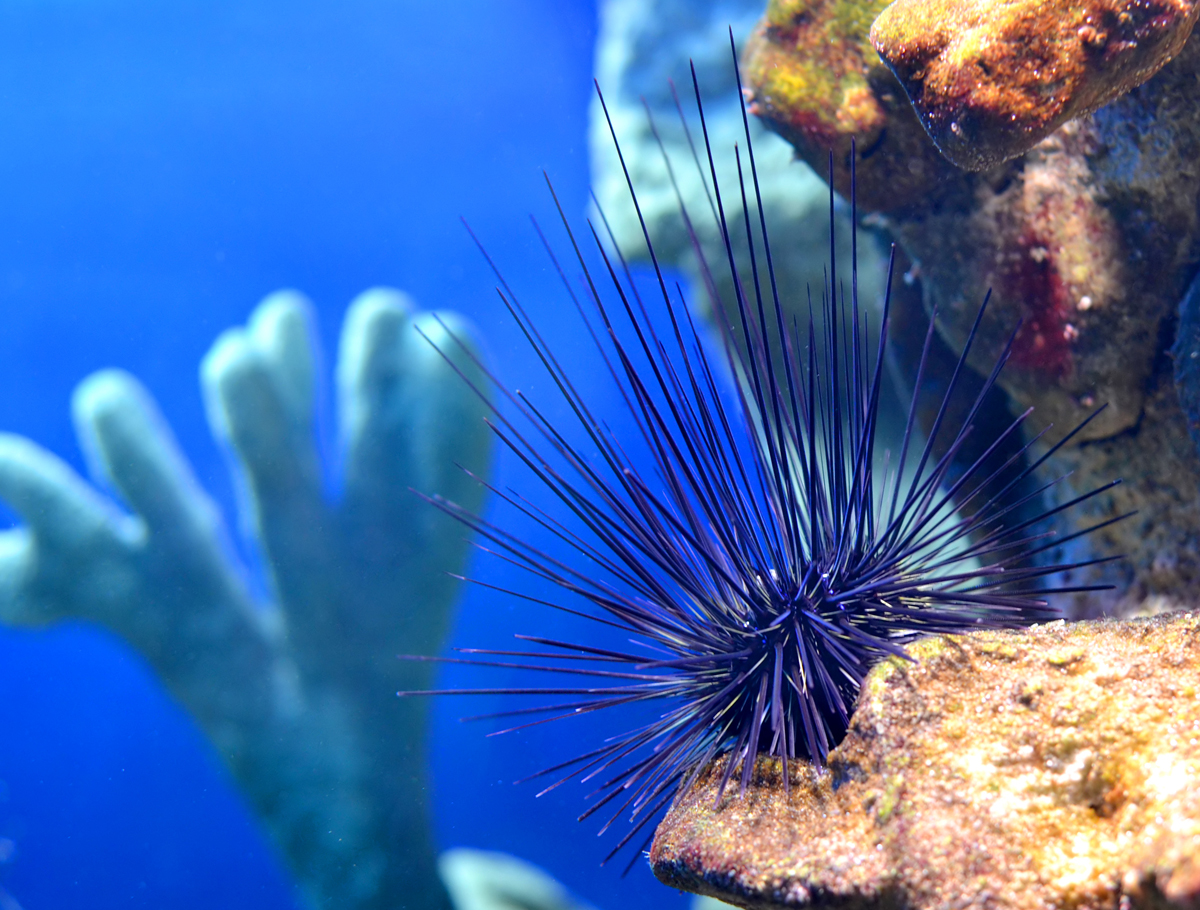 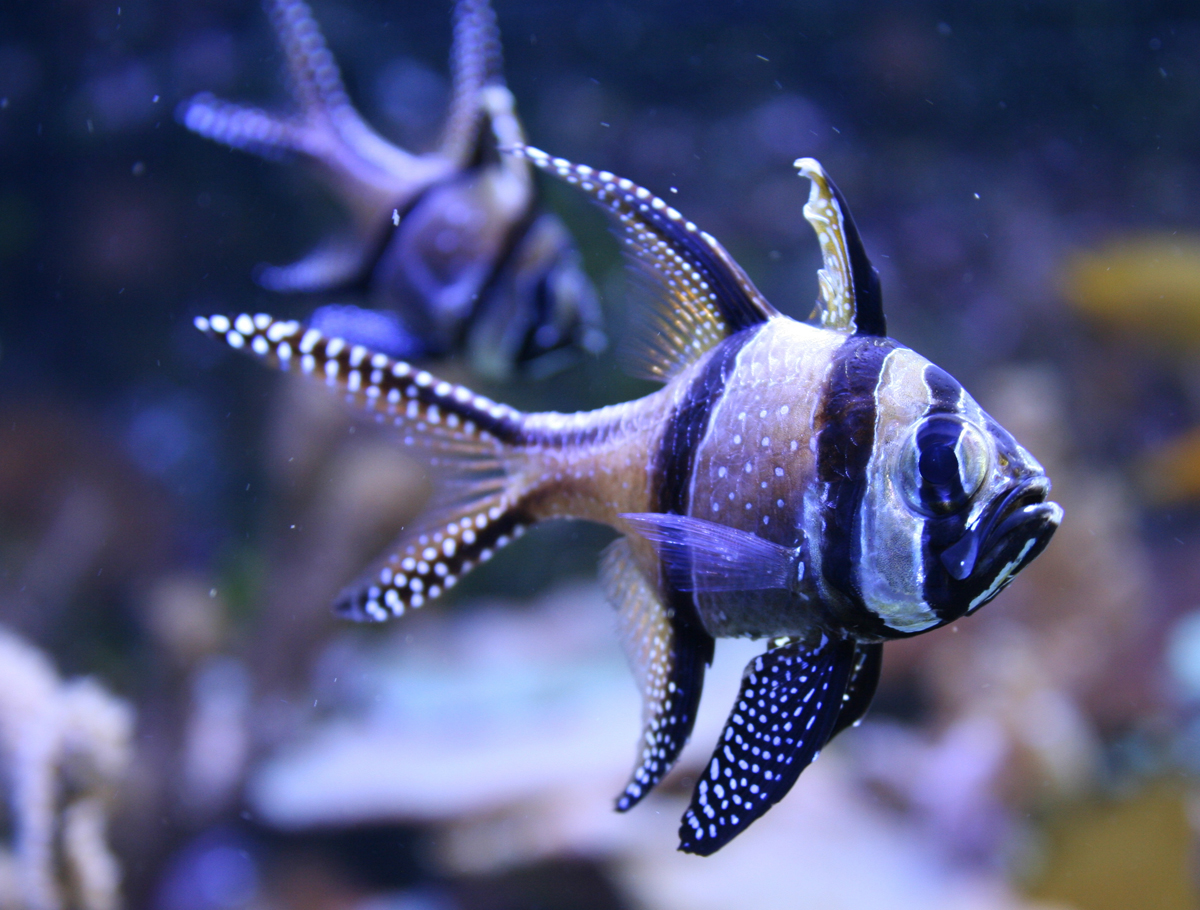 The gestation in Cardinal Fish (Pterapogon Kauderni) it takes place in the mouth of the male who – throughout its duration – stops eating to ensure the proper development of the fry.