THE FASCINATIONS OF JELLYFISH

Our Moon Jelly (with scientific name Aurelia aurita) can be admired in the two tanks dedicated to them along Livorno Aquarium’s visitor itinerary, immediately after the Touch Tank.


It’s easy to be enchanted by the beauty and elegance of these jellyfish, characterized by the perfectly spherical shape of the umbrella, a white diaphanous and transparent, and by the presence on its top of 4 circular structures such gonads that precisely form a structure from the similar shape that of a four leaf clover, from which the species takes the common name. 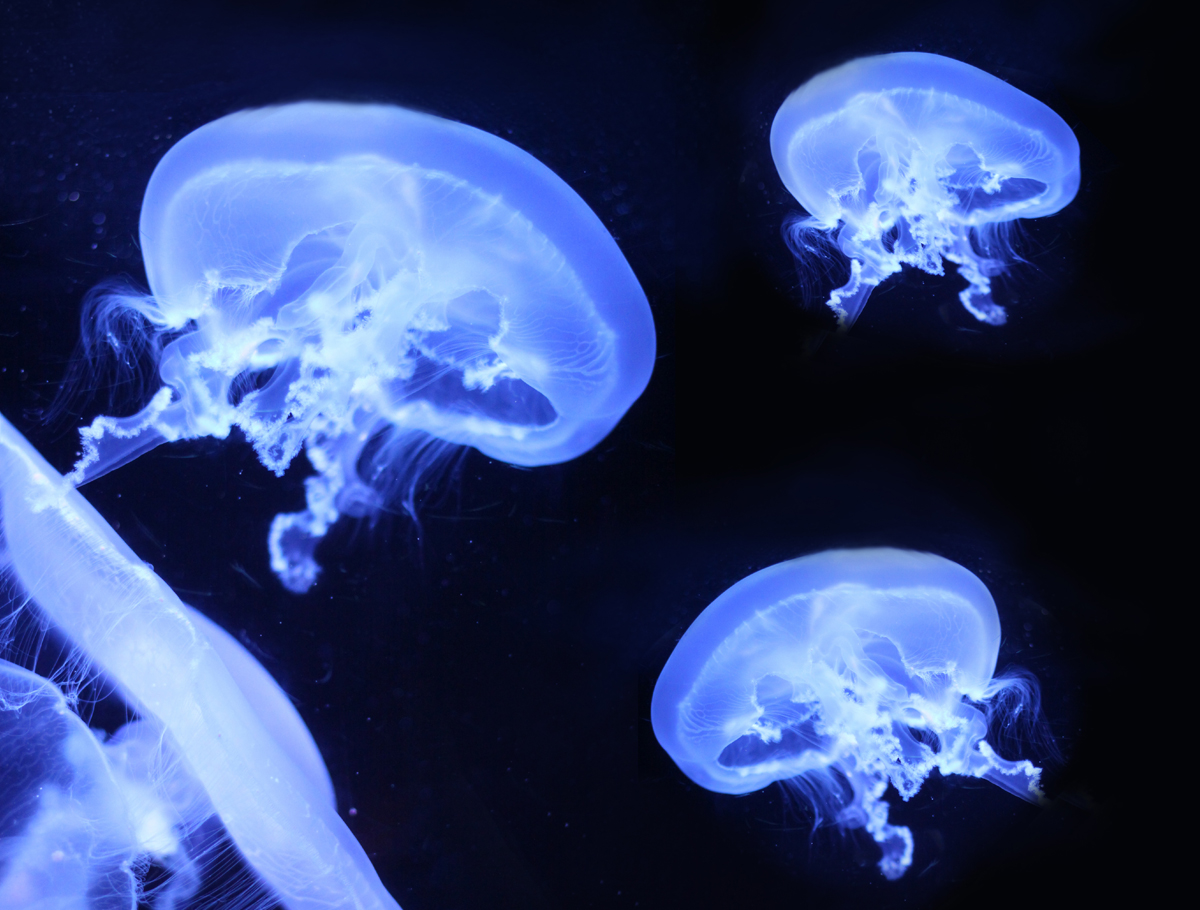 The tentacles of these jellyfish contain special cells called “cnidocytes” that explode to release toxins only a single time, meaning that they must then be regenerated. They have a defensive function, but are used above all for offensive purposes, to paralyze prey.

The action of cnidocytes is triggered when they are touched, due to the presence of a pressure-sensitive sensory mechanism called a “cnidocil”, and they then extend stinging filaments called “cnidae”. Cnidae can be of different types, either nematocysts or spirocysts, and they are connected to specific organelles, which are cnidoblasts containing an irritant liquid. Cnidae usually inject a substance that kills the prey by anaphylactic shock. The irritant liquid has a neurotoxic and emollient action that varies according to the species, but it usually consists in a mixture of three proteins with a synergistic effect.

In his studies, Nobel prize-winner Charles Robert Richet identified these three proteins and classified them as hypnotoxin, thalaxin and congestin. Hypnotoxin has an anaesthetic effect, and therefore paralyzes the prey. Thalaxin has an allergenic action, generating an inflammatory reaction, and congestin paralyzes the circulatory and respiratory systems.

Even though not all jellyfish sting, some box jellyfishes, like the Chironex fleckeri, are particularly dangerous for humans, and in several cases have been known to cause death by anaphylactic shock.

According to Fenner & Williamson (1996), the fatal incidents reported occurred above all in the areas of Southeast Asia, Oceania and the Gulf of Mexico. The jellyfish species normally present in the Mediterranean are never as dangerous.

An overview of the specific action of each toxic substance contained in single jellyfish species is given in Mediterranean jellyfish venoms: a review on scyphomedusae by G. L. Mariottini and L. Pane of Genoa University.

The stinging substances released by jellyfish nematocysts provoke an acute inflammatory reaction with erythema, swelling and blisters, accompanied by sensations of burning and pain. This reaction is the result of the direct toxic effect of the liquid contained in jellyfish tentacles (nematocysts). Jellyfish can sometimes also cause delayed cutaneous lesions.

Delayed cutaneous reactions to jellyfish stings are a serious medical problem that often involve eczematous lesions days or even months after contact with these invertebrates. In the most serious cases, experimental treatments with immunosuppressors may be effective. Sometimes the cutaneous lesions take the form of recurrent dermatitis.

Common remedies for jellyfish stings include diluted solutions of sodium bicarbonate, ammonia or acetic acid to relieve the itching sensation caused by the jellyfish nematocysts. A recent American study showed however that these substances have no soothing effects on the pain felt. On the contrary, the local anaesthetic lidocaine has an action that inhibits the release of the toxins by blocking the calcium and sodium ion channels of the nematocysts, and also has a calming effect on the affected skin.

First-aid treatments also use vinegar, before applying a compression bandage, or in the case of the tentacles of the tropical species Tamoya gargantua, ice, aluminium sulphate or hot water.

The treatment of choice however in dealing with the more serious conditions of inflammatory reactions to jellyfish toxins is steroids, which are able to control the most acute complications of inflammation.

As soon as there is a contact between our skin and the jellyfish, we feel a sharp burning sensation and pain. Immediately afterwards the skin reddens, and small wheals form.

After about 10–20 minutes, the burning sensation diminishes and becomes one of intense itchiness.

The degree of pain and burning sensations varies according to the area of skin affected, and it may become unbearable if more than 50% of the body surface is stung.

The first thing to do is to stay calm and quiet, and to breathe normally, without panicking. If you’re close to the shore, reach it and leave the water. If you’re in the open sea, try to attract the attention of the nearest vessel for assistance and to help you to get out of the water.

After leaving the water, check that there are no jellyfish fragments still attached to the skin. If no medical treatments are near at hand, the only thing to do is to run seawater over the inflamed area, to dilute the toxin that has not entered the body yet.

Do not scratch or rub the sting, or apply improvised treatments like ammonia, vinegar, alcohol or other do-it-yourself remedies, as these would only worsen the situation.

Jellyfish mate sexually, in a similar way to many fishes, with the females depositing eggs in the water and the males releasing sperm that then fertilizes the eggs.

Later, larvae hatch out from the fertilized eggs, attaching themselves to a firm surface and subsequently becoming polyps (called “scyphistomae”).

As each polyp grows, it produces a number of young jellyfish that detach themselves and swim away freely in the water.

A new polyp buds out of the original polyp, and this bud later develops tentacles and a mouth, separating itself from its parent.