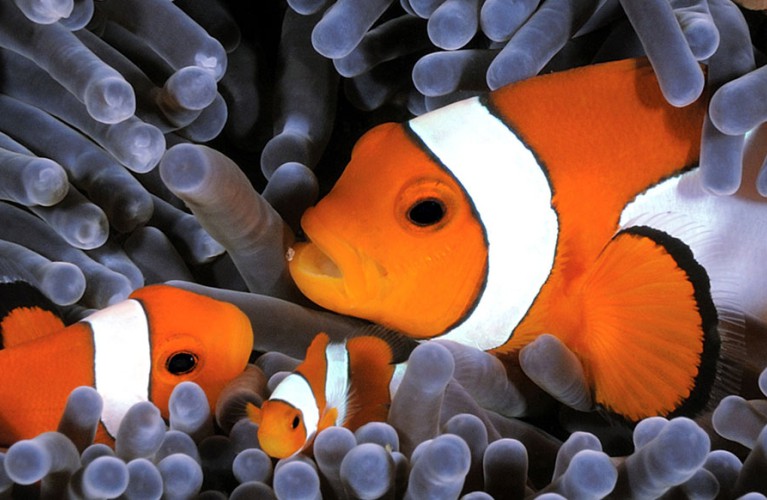 Clownfish have become particularly famous, especially for children, thanks to the cartoon film “Finding Nemo”, in which they are the stars.

Their bright colours and the fact that they live in symbiosis with sea anemones also help to make these fishes so greatly loved by the public. Their name comes from their colourful appearance, which ranges from orange to reddish, with black or white stripes.

The peculiarity for which clownfished are know is their symbiosis with some species of anemones. They find refuge in fact between the tentacles of these anemones, but are immune to their sting thanks to the mucous that covers their body, giving them protection against predators.

In exchange for this “hospitality”, Clownfish carry some of the food that they capture between the anemone tentacles.

These fishes are common in the Red Sea, Indian Ocean and the Pacific Ocean. They are usually territorial, but many species also live in small groups on one or more adjacent anemones, given their small size.

These interactions have effects on the density of populations, and can therefore be positive if population density increases, negative if they decrease, and neutral if they neither increase nor decrease.

Symbiosis in nature can be divided into the two distinct categories of ectosymbiosis and endosymbiosis.

In ectosymbiosis, the symbiont lives on the body surface of the host, including the internal surfaces of the intestinal tract and exocrine gland ducts.

In endosymbiosis, the symbiont lives between the cells of the host, or inside the cells themselves.

Symbiosis, and in particular endosymbiosis, generally allows new functions to be acquired, which may be metabolic (photosynthesis, nitrogen fixation, chemosynthesis, cellulose digestion) of non-metabolic (luminescence, protection against chemical, physical or biological agents).

Effectively, mutualism, parasitism and commensalism are not distinctly separate categories of interaction, but should much rather be seen as stages on a continuum of interactions ranging from mutualism to parasitism. The orientation of a symbiotic interaction may change during the life of the symbionts due to variations in their development, or even due to changes in the environment in which the interaction occurs.

In some cases the word “symbiosis” is used only if the association is obligatory and benefits both organisms. As defined here, symbiosis does not limit the term solely to reciprocally beneficial interactions.

Symbiosis can be cyclical or permanent.

Cyclical symbiosis occurs when the two partners must activate the association with every new generation. In this case, there is an exchange of chemical signals for the purpose of recognition (or to deceive the host, in the case of parasitosis), followed by various types of genomic and metabolic controls that allow the symbiotic functions to be activated. Plants and fungi establish this kind of symbiosis.

Permanent symbiosis occurs when the symbiont lives only in association with the host. In this case, the symbiont is transmitted vertically, from generation to generation, and often on the maternal side, inside egg cells, and when this happens the genomic and functional modifications of both the endosymbiont and the host are so significant are neither of them are able to live without the symbiosis.

The evolution of an organism with a permanent symbiosis makes it easy to recognize monophyletic groups with only a single evolutionary origin, and all or almost all of these have compulsory symbiotic associations. Often it is also possible to observe a close coevolution between the descendants of the two partners. Many creatures experience this type of symbiosis, above all with fungi and bacteria.

prev
Napoleonfish
next
Corals
Buy now
and save with tickets online!