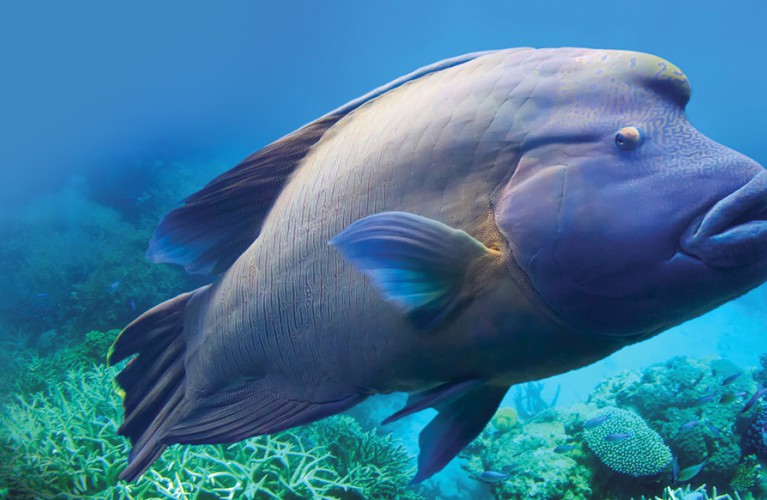 Inside Acquario di Livorno, in the indopacific tank, swim two Napoleonfishes together with the blacktip sharks and the two green sea turtles "Ari" and "Cuba".

The Napoleonfish is characterized by the presence above its head of a distinctive irregular globular hump, which grows with age and gives the fish its name, due to its purported resemblance to the hat often worn by Napoleon.

This species, the scientific name of which is Cheilinus undulatus, belongs to the Labridae family, and has a high body with slender sides that are strong and muscular. It has a protractile mouth and thick, fleshy lips.

The Napoleonfish can also be easily recognized from its colouring, which varies from shades of light blue to emerald green and from pea green to pinkish grey, with a mesh of thin yellowish lines forming a labyrinth over the entire body and fins, with the exception of the head. Young Napoleonfish are usually lighter in colour.

Above all when young, Napoleonfish usually live near coral reefs and lagoons, at depths of up to 60 metres. The species is a prevalently solitary one with diurnal habits that tends to occupy the same area.

It is found mainly in the Red Sea and in the Pacific region of Micronesia. As a species it has been endangered for several years, as its lips and some parts of its body are highly prized as food.

The Napoleonfish feeds mainly on molluscs, crustaceans and small fishes.

Buy now
and save with tickets online!