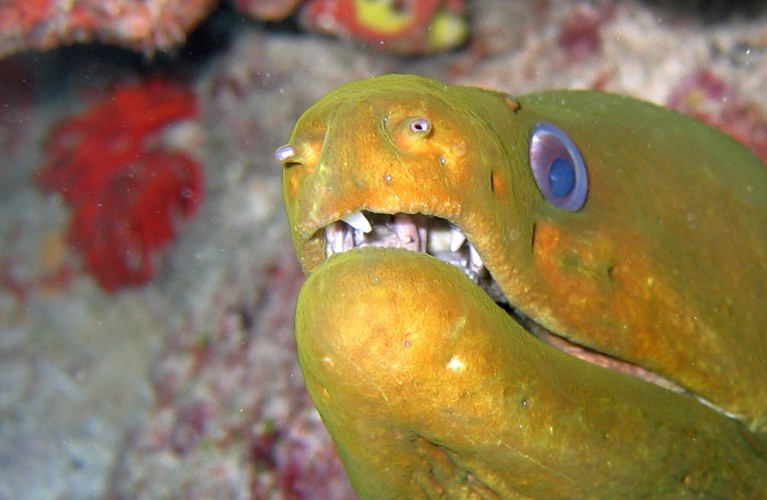 The Muraenidae family includes several species of fishes generally known as “morays” and belonging to the Anguilliformes order.

For a long time these animals have been considered to be very fierce and with a menacing appearance, due to the continuous opening and closing of their mouths. In reality, these movements are necessary to morays to be able to breathe, as their gill aperture consists in only single opening, small and located behind the head. Many species have tubular nostrils, similar to short tentacles. They can grow to lengths of 150 cm, and have a typical marbled colouring. They are nocturnal creatures and during the day only their head can be seen emerging from their lair.

An average size of 120 cm, but some genera (Gymnothorax and Strophidon sathete) may even exceed 3 meters.

At Acquario di Livorno, it is possible to admire 4 different species of morays.

In particular, a specimen of the green moray eel and one of the comb inside the caribbean tank; other specimens of morrays in a tank of the meditteranean gallery.

The Mediterranean Moray has a compact cylindrical body, with a mouth that opens beyond the eyes and lateral nostrils, which are often tubular. It has strong teeth, sharp or blunt, arranged in one or more rows on the jaws and the vomer. The small gill chambers open internally and the tongue and pectoral fins are absent.

Nocturnal animals, hiding during the day in their lair. It feeds on fish and shellfish that catches near the dens or inside the narrow rocky crevices.They breed in summer, laying eggs with a diameter of about 5 cm, and in winter they move to deeper waters.

The Green Moray, which grows to lengths over two metres, is one of the world’s largest morays. Its name comes from the distinctive colouring of its skin, which is usually bright green, but can also vary from yellowish to brown.

It lives in the Atlantic Ocean, but only in the tropical zone. Its aggressive appearance, with the mouth always showing the teeth, is due instead to a physiological necessity shared by all morays. To breathe, in fact, they need to pump water into their gills through the mouth, which they therefore keep partially open, as they have no operculum to achieve this.

This species reaches a maximum length of 70cm. Lives in shallow water, where it blends in among the corals in search of food .

prev
Starfish
next
The octopus
Buy now
and save with tickets online!