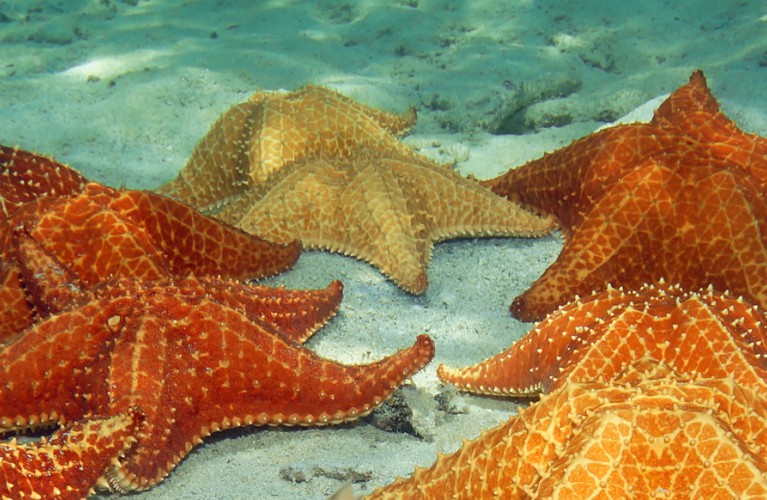 Starfish, which are echinoderms belonging to the Asteroidea class, are one of nature’s most fascinating machines to be admired while they move slowly in their natural habitat. Despite their great beauty and apparent delicacy, they are the most voracious inhabitants of the seabed.

There are numerous species of starfish, and some have very bright and lively colours. This is why bathers and divers throughout the world collect them, without realizing that the colour of the starfish will change drastically after they die.

Most starfish have five arms that branch out from a central disk, but there are also many species that have six or more arms. Many members belonging to Asteroidea, such as the Solasteridae, have between 10 and 15 arms, and other species, such as Labidiaster annulatus, which lives in the Antarctic, may have as many as 50.

This group of organisms has adopted a very particular to feed. In fact, when the starfishes find a prey  they cove it and evert the stomach up to swallow the prey whole.

This process can take a long time and then, paying attention, it can be easily observed during snorkelling or diving. Among their prey are molluscs, small crustaceans and carcasses of dead organisms.

Moving with a tube systhem

In recent years, a real scourge caused by overfishing of lobsters is coming down on the coral reefs of Australia . Lobsters play an important role as kept watch over the population of a species " corallivora " - called Stella Crown of Thorns (Acanthaster plancii). With the drastic reduction of lobsters, the star has undergone a veritable population explosion , causing serious damage to the reef.

There are many starfish that can be seen in the display tanks of Livorno Aquarium, in particular in the tanks "The Pearls of the Mediterranean" dedicated to the beauty of our seas and in some tanks of Gallaria Mediterranean

prev
Jellyfish
next
Morays
Buy now
and save with tickets online!