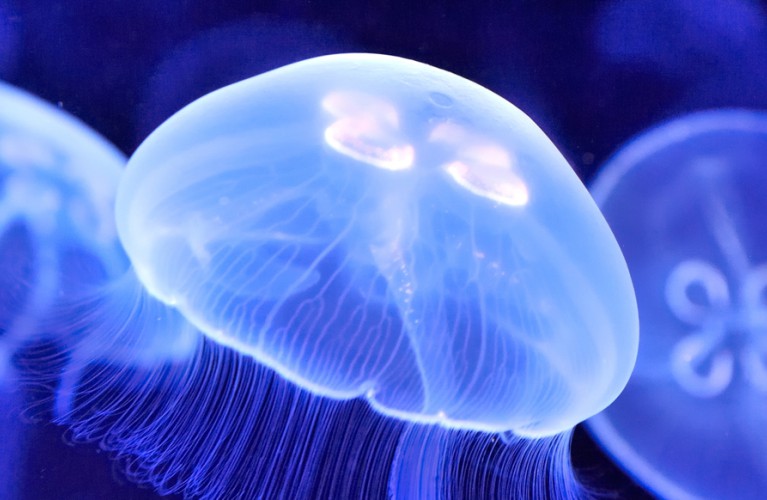 Jellyfish - among the first living organisms to appear in the oceans, more than half a billion years ago - are creatures that fascinate and enchant the public. Seeing these animals, with their slow “pulsating” movements, is something that offers unforgettable images and emotions.

Jellyfish are prevalently marine planktonic animals. Their umbrella-shaped body is called a “bell” and is made up of about 98% of water. Inside there is the “mesoglea”, a gelatinous structure that allows these creatures to float better in the water.

Beneath the bell there is a more or less elongated structure called the “manubrium” that terminates in the mouth. When fully grown, the bodies of jellyfish can reach diameters up to 45–50 cm and lengths of several metres, thanks to the long tentacles that characterize above all pelagic species.

They are distinguished by their particular form, which is generally that of an inverted polyp from which stinging tentacles hang, used both for defence and to paralyze prey.

Jellyfish feed mainly on small planktonic organisms, but also eat the eggs and larvae of food fishes and crustaceans, which can cause considerable damage to the fishing industry in case of a population explosion.

The tentacles are triggered by a pressure-sensitive sensory mechanism when they are touched, and they then extend stinging filaments. Although not all jellyfish sting, some, above all in South-East Asia, Oceania and the Gulf of Mexico, are particularly dangerous for humans, and in some cases have even been known to cause death by anaphylactic shock. The jellyfish species normally present in the Mediterranean Sea are never as dangerous.

The visitor itinerary of Livorno Aquarium has several specimens of the Moon jelly (Aurelia aurita), in two tanks dedicated to them, that visitors can see after the touch pool.

The Moon jelly belongs to the genus Aurelia. This jellyfish can be easly recognized by its perfect shape of umbrella, white and transparent, and by the presence of its top of four circular structures called gonads, that create a structure of a shape similar to the shape of a quatrifoil.

The Moon jelly is alsa equipped with thin and short stinging tentacles that come down from the rim of the umbrella: this gives the jellyfish a jagged appearance.

From the umbrella center leave also 4 ticker arms, which can be easly seen only in older individuals.

prev
Corals
next
Starfish
Buy now
and save with tickets online!