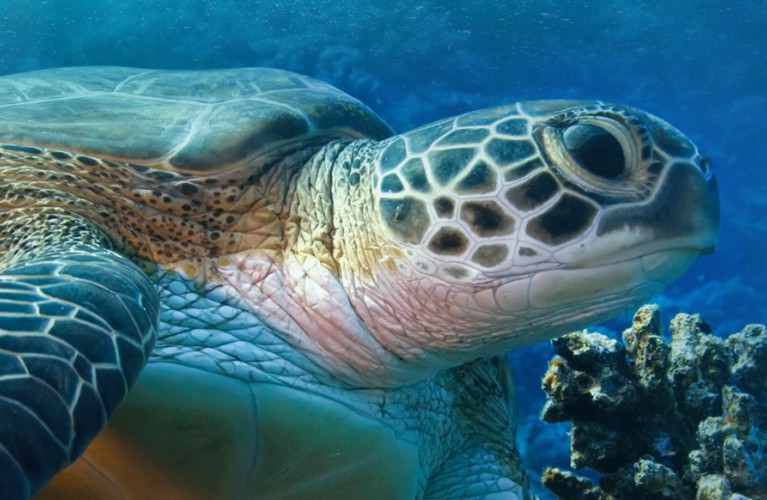 The sea turtles (Cheloniidae) are a family of turtles that are amongst the oldest creatures on the Earth. They are long-living reptiles and grow to large dimensions, perfectly adapted to marine life thanks to the elongated form of their body, which is covered by a robust shell or “carapace”, and the presence of limbs that have evolved into flippers.

Like all reptiles, these creatures are cold-blooded, making them prefer temperate waters. They have lungs and therefore breathe air, but they can also stay underwater for long periods.

Sea turtles pass most of their life deep in the sea, in seagrass meadows or near coral reefs, coming to the surface only occasionally to breathe. They leave the sea only to lay eggs, and then returning to the water.

They feed on crustaceans, molluscs, jellyfish and algae.

Three of the seven known species of sea turtles can be found in the Mediterranean Sea.

All species of sea turtles are unfortunately threatened by human activities: fishing, vessel traffic, plastic waste causing hundreds of deaths every year that end up stranded on the coasts of the Mediterranean Sea.

This animal is certainly the most common species in our seas where there are also nesting sites (eastern Mediterranean Sea). Can reach 100kg weight and just over 1 meter in length. Lives mostly along the coast, but makes migration to reach nesting sites.

Less frequent in the Mediterranean Sea, is typical of the oceans where it migrates long distances (up to 2000km ). Larger than the loggerhead turtle, the Green Sea Turtle is characterized by the green color of the shell from which its name to the species. It feeds mainly on jellyfish, corals and seagrasses and, for climatic reasons, it prefers the coasts of the Eastern Mediterranean Sea.

Exceptionally found in our sea, this large species of turtle has pelagic life and behavior, that is typical of the open sea . Dark in color, streaked with white, has a carapace smooth texture that recalls the leather : in English is called just Leatherback, or the back of leather. The shape of the carapace and the length of the front flippers make it a formidable swimmer; the partirolcare coloring allows it to blend in well in the open ocean (against shading).

Two Green Sea Turtles, named "Ari" and "Cuba" can be admired at Livorno Aquarium in the indopacific tank.

The breeding season of this species generally depends on the latitude . Mating usually takes place just off the coast: in this species there a lot of competition among males to ensure the possibility of coupling. Spawning occurs sometimes months after mating. When the turtle reach the chosen beach, it hollows until the rear fins are able to move the sand.

The turtle than places between 100 and 200 eggs: the gestation period lasts between 40 and 70 days after which the eggs hatch giving birth to the little turtles. Of these, only a small percentage will be able to dive and, in the case of females, to start the amazing journey that one day it will bring them back on the same beach where she was born, to spawn theirs eggs.

prev
Iguana
next
Napoleonfish
Buy now
and save with tickets online!